We are a Google Apps school and one of the advantages of this is that there are a number of applications that allow our students to log in using their Google apps username and password.

One of these applications is Video Notes (VideoNot.es). It is an application in which you load a video into the browser and you can type notes as you watch the video. The notes are time-coded to the part of the video when you started typing the note. You can click on any note and it will take you to that part of the video.


VideoNot.es works really well with videos that are posted on the internet like ones on YouTube or Vimeo.

As our younger students can't upload videos to YouTube or Vimeo, we have them put the video into the Google Drive. Even though VideoNot.es integrates with Google Drive really well, it isn't easy to add a video from Google Drive into VideoNot.es. However, It can be done and this is a powerful tool that can be used in many ways in the classroom.

If you want to enable dictation (speech to text) on your mac, you will need to turn it on in your system preferences. 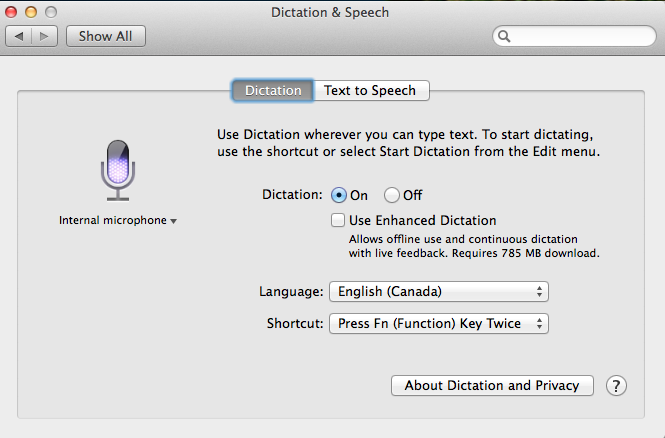 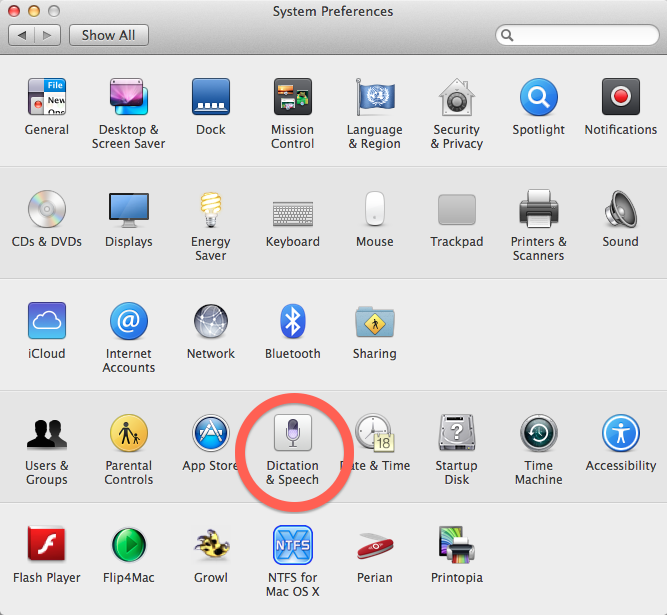 Remember to start with https://googledrive.com/host/ and then add the number part of the address of the video in Google Drive.


When we first start to add online learning resources for our students, it's a natural tendency to simply add offline resources - the worksheets, presentations, and readings that we've already got.

Here's an example of a Unit makeover aimed at a HS Economic topic. In this example, there are four different kinds of media embedded. (See the playlist below to see how to find the embed code and add to the OLP) These elements are structured with a particular flow in mind, each one is also framed by the teacher with specific instructions and questions to the student helping them know how to interact with the media.

One of the aspects of student learning and thinking that we are trying to capture at United World College is students' thoughts during their partner conversations. We know that a way that students learn best is by talking about their thinking with a partner or group.

As digital literacy coaches, we have been trying to find ways to capture this thinking. An easy way would be to use an iPad or a computer to record the partners talking. 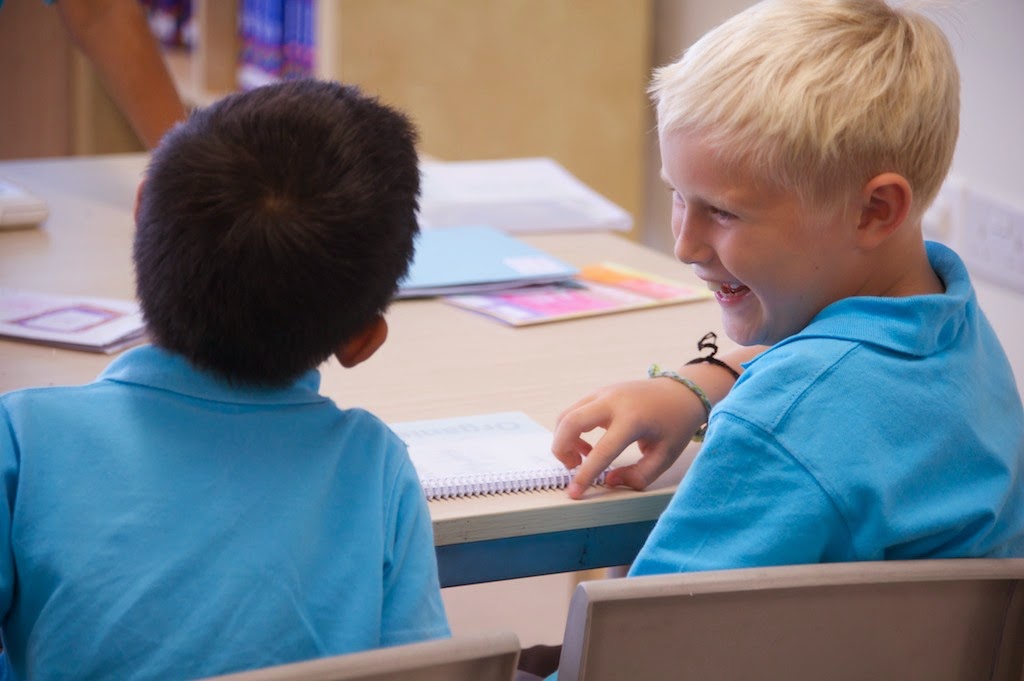 However, when we tried this, we discovered that the sound was terrible. In many cases, we had to ask the students to speak very loudly and have everyone else in the class not make sound. This worked, but wasn't a very authentic and easy way to capture these conversations. Some teachers tried pulling students out of the classroom to a quiet place and recording the conversations there. Again, not something that is easy or that sustainable.

We wanted a solution that worked in the classroom, when all the students were talking and was easy to set up. We decided to try out a few different headphones with built in microphones. Why headphones? Headphones are commonplace in the classroom and we don't want to purchase any special equipment if we don't have to.

We tested microphones that have one plug for audio in and audio out and that worked with the iPads and with the MacBooks. Why these particular headphones? These headphones were given to us to try by our good friend Doug Taylor who is a teacher and app developer. 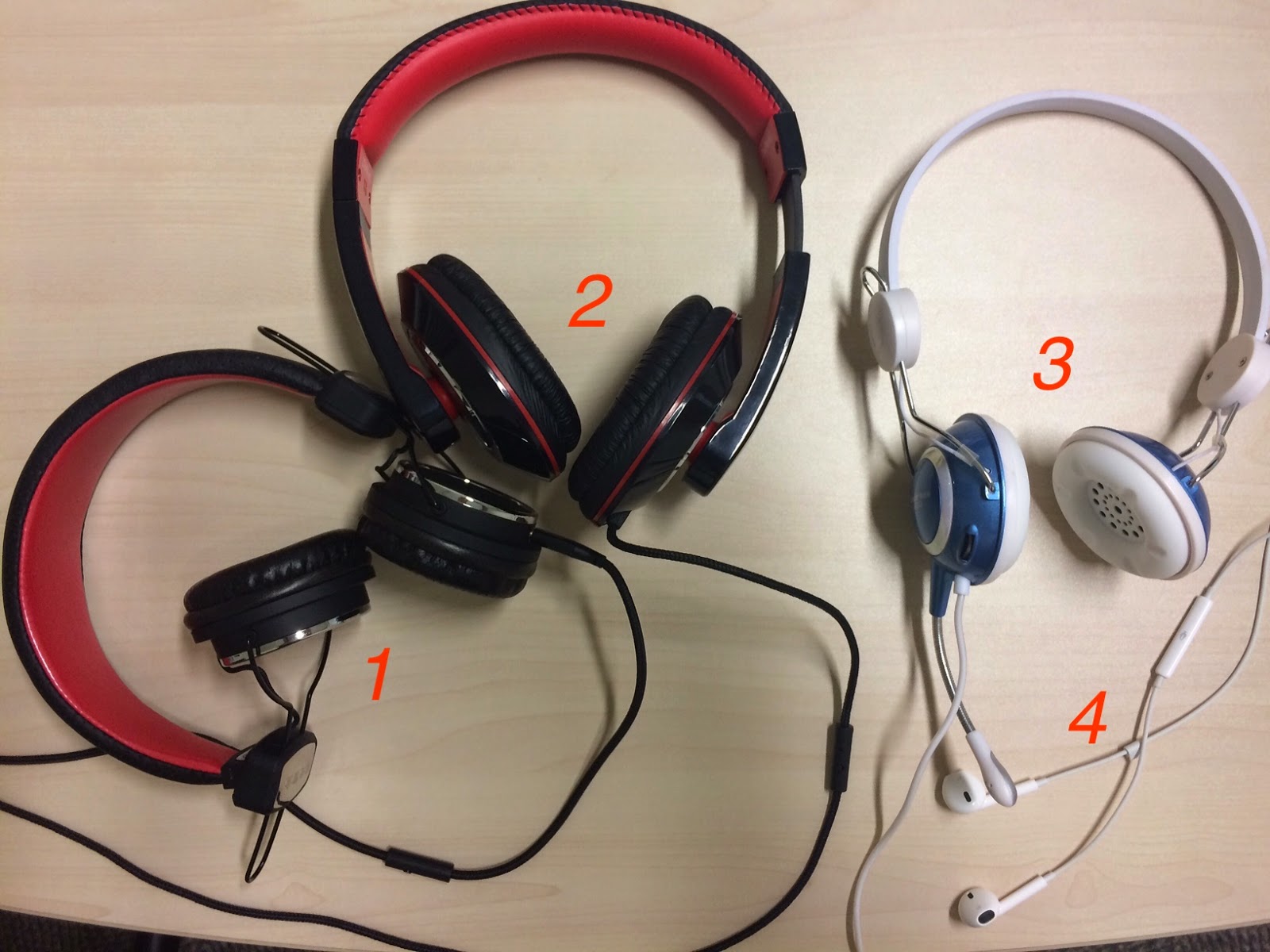 Headphones #1-3 are over ear headphones and headphone #4 is the in ear Apple headphones with a microphone.

The test was simple. I set up a computer and an iPad to record a conversation between two students. The other students in the class were also having conversations in the background. I started with the computer and quickly rotated the headphones through to try to get as fair a test as possible. Then I recorded on the iPad and, once again, rotated through the microphones as quickly as possible. For each of the test, I moved the headphones as close to the girls talking as possible.

Have a look at the results for yourself.


I noticed a few things. First and most importantly, it didn't matter which headphones I used, they were much better than the sound recorded from either the iPad or the computer without a headphone attached.

I also noticed that the sound recorded by the macbook seemes louder than that from the iPad.

If I have to pick the ones that I felt were the best, I feel that headphones number 3 and the Apple headphones (#4) gave the best sound. In terms of cost, we can get headphone #3 for less than $15 and the Apple ones are more than twice that cost.

So in conclusion, if you want to record the sound of partner conversations in a noisy room, get some headphones and you will hear a big difference.

One of parents' biggest concerns around student use of technology is that of distractions. The same tool we use to create and learn, can be used to entertain and derail productivity.

So what are our options, as teachers? As parents?

We could create elaborate structures of control (blocking certain websites, turning off wifi etc), but that is only a temporary solution.

At UWCSEA, we prefer to educate students about distractions, with a view to creating informed citizens, who learn to manage their tendencies to get distracted. This is of course what all adults need to learn to do themselves...

This skill of self-management takes time to develop, and students need lots of opportunities to practice. They may well need frequent reminders throughout their schooling of techniques and approaches to reducing distractions, and this is where responsive teaching comes to the fore.

One of the ways we have begun to educate students about distractions is through the Personal and Social Education curriculum. Recently, I co-taught with a Grade 3 teacher, who was concerned her students were getting side-tracked with Google Chat, and who wanted some strategies for helping students remain focused during class.

When I walked around the room, I asked if I could borrow a few students' computers to show the class. Here's what we found:

Personalisation
Like adults, students in our Grade 3 class loved personalising their computers. The majority had chosen a desktop background of something they were interested in (Minecraft, soccer players, horses etc) and many had changed their Gmail backgrounds to have snow falling or animated gifs moving in the background at all times.

Just because you can, doesn't mean you should.
Movement and colour can attract attention, often away from what we should be focusing on. Think about visiting a news website, for example. Advertisements often contain moving elements, as these attract the eye - a deliberate attempt by the advertiser to get you to notice what they are selling.

If we choose to have moving elements on our Gmail backgrounds, or our desktop wallpaper (one of the options on a Mac is to have a new desktop background picture every 5 seconds), then we are making it much harder for us to concentrate on our school work.

Colours that help promote calm and thinking are greens and blues, so they were recommended to the students as colours they might like to choose for their desktop and Gmail backgrounds. We encourage personalisation, but we want to make students aware that their choices have an impact on their learning. Students went back to their computers and made changes they were comfortable with.

Chat
The ability to send and receive instant messages is a relatively new phenomenon for our Grade 3 students. Understandably, it's an exciting feature to explore. Many students have older brothers or sisters who like seeing their younger sibling online, and take the opportunity to check in. This puts the younger student in a bit of a conundrum - do I reply to my sibling, or stay focused on my school work?

In one of those serendipitous twists of fate, this exact scenario occurred while I was in the room, providing us with a perfect teachable moment.

We plugged in the computer of a student whose sibling had sent a G-Chat message, and asked the students what they could do in this sort of situation. There were lots of animated discussions in groups about this scenario, and we collected some of the responses and evaluated them as a class.

"We could turn our G-Chat to invisible, so noone knows we are online."
"So can people still send you messages when you're invisible?" we asked.
"Yes, they could."
"Have a think about how that might that affect your learning," we suggested.

"We could turn our G-Chat to busy, so people know we're working."
"So can people still send you messages when you're busy?" we asked.
"Yes, they could."
"Have a think about how that might that affect your learning," we suggested.

"We could sign out of G-Chat when we're at school."
"So can people still send you messages when you're signed out?" we asked.
"No, they couldn't."
"Have a think about how that might that affect your learning," we suggested.

We then sent students back to their desks to make a decision that would help them remain focused on their learning following the discussion with the class.

Documenting Thinking
The final piece of the puzzle was to document their thinking about distractions, and the changes they decided on for their laptops using a Quicktime Screen Recording, which we embedded in their Google Site (see below for details)